PALPA, Sept 17: Despite high demand of coffee both in internal and foreign markets, the country is producing coffee far below its capacity.

Farmers say the production of coffee is even declining in some areas of Gulmi and Palpa districts in the western Nepal in recent times.

The decline is largely attributed to farmers' migration and lack of supportive environment in the remote areas.

Despite difficulty in production, the market for coffee is attractive, according to farmers. "Market has never been a problem for us," said Iman Singh Kunwar, a coffee producer.

Parshu Ram Acharya, who has been involved in commercial coffee farming in Gulmi, said that though foreign consumers liked the taste of Nepali coffee, the government of Nepal has shown little interest towards supporting production and export of Nepali coffee.

He said that if the government could promote coffee production, the potential of coffee farming was very high in Nepal. "We can increase production but for that, we need support from local units and the provincial and federal governments," he said.

"We have been getting assistance from various organizations for coffee plantation, care, seed production and processing. We also give 50 percent grant. However, only 29,250 coffee seeds were planted in the last FY," said Khanal.

Meanwhile, Barangdi Siddha Kalika Coffee Prodcution Cooperative has also started a coffee processing factory. "There is high demand of coffee in the internal market as well," Khanal said. He said that the coffee produced in Gulmi and Palpa is exported to Korea, Japan, Germany and America.

"Every year, around one ton coffee is exported from Palpa and Gulmi," said Bhaskar Gyawali, secretary of District Cooperative Association, Gulmi. 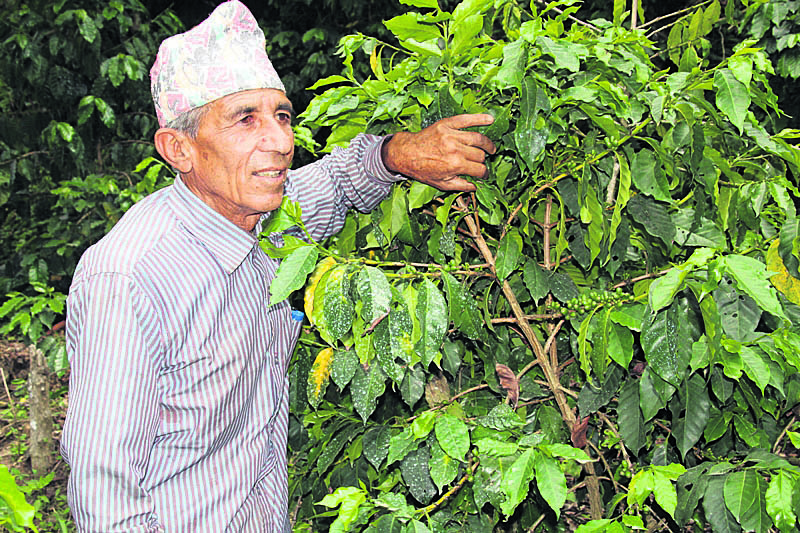