KATHMANDU, Nov 18: Earnings from coffee export increased nominally by 6.28% compared to a whopping rise of 49% of coffee imports in Fiscal Year 2018/19, thanks to a surge in demand for the cash crop.

According to the National Tea and Coffee Development Board, Nepal exported Rs 99.61 million worth of coffee in the last fiscal year, up from Rs 93.72 million in FY2017/18. During the period, the country’s spending for coffee imports increased from Rs 65.89 million to Rs 98.01 million.

The board’s statistics will come as a surprise if money value of imports and exports is compared to the traded volumes. While coffee imports escalated eight-folds to 1,262 tons in the review period, exports remained fairly stable at 84 tons. This implies that Nepali exported coffee is priced significantly higher than the imported ones.

Deepak Khanal, acting executive director of the board, told Republica that the specialty coffee of Nepal is recognized as one of the high value agri products in the international market. “Our high-value fetch local product fetch good price abroad,” said Khanal, adding that Nepali product costs up to $10 per kg abroad.

According to Khanal, traders have even been importing coffee of foreign brands at as low as Rs 70 a kg. “With the reason, there is a significant price difference in import and export despite a large variation in trade volume,” added.

Khanal added that the exports cannot be increased by a sizeable volume also because the demand for coffee is increasing in the domestic market.

Coffee is grown in 42 districts of Nepal. Nepal produces and exports Arabica coffee which is typically grown at an altitude of 1,000 to 2,000 meters.

The board’s statistics shows that Nepal produced 530 tons of coffee in FY2018/19, compared to 513 tons in FY2017/18. Citing surging demand for the high value cash crop, the government has given priority to commercial farming of coffee under the Prime Minister Agriculture Modernization Project, according to Khanal. The government’s ambitious project has identified Palpa, Arghakhachi, Gulmi, Syangja and Pyuthan districts as super zone for coffee production. According to the project, the government has recently launched super zone programs in Gulmi and Pyuthan.

Uma Nath Bhandari, a senior agricultural officer at the project, said that the project have started work on developing nursery, producing saplings and plantation of coffee plants in these two districts. “In addition, the project is helping farmers in capacity building, managing irrigation facility and subsidizing the agricultural tools required for coffee production,” he added.

A report of the Trade and Private Sector Development Project, a European Union-funded program, shows that 1.19 million hectares of land in Nepal is suitable for coffee farming. Of them, 61,228 hectares have the potential to give high yields. However, the country is utilizing only 4% of the acreage potential.

According to the board, coffee farming is being done in 2,761 hectares of land which is less than one percent of the high potential land area of the country. Lack of manpower, absence of research and implementation of traditional technology are the underlying problems for low yield of the cash crop.

Meanwhile, the government has fixed the floor price of Nepali coffee for FY2019/20. According to the board, high value fresh cherry has been priced at Rs 85 per kg while those of parchment coffee and dry cherry have been maintained at Rs 425 per kg and Rs 140 kg respectively. 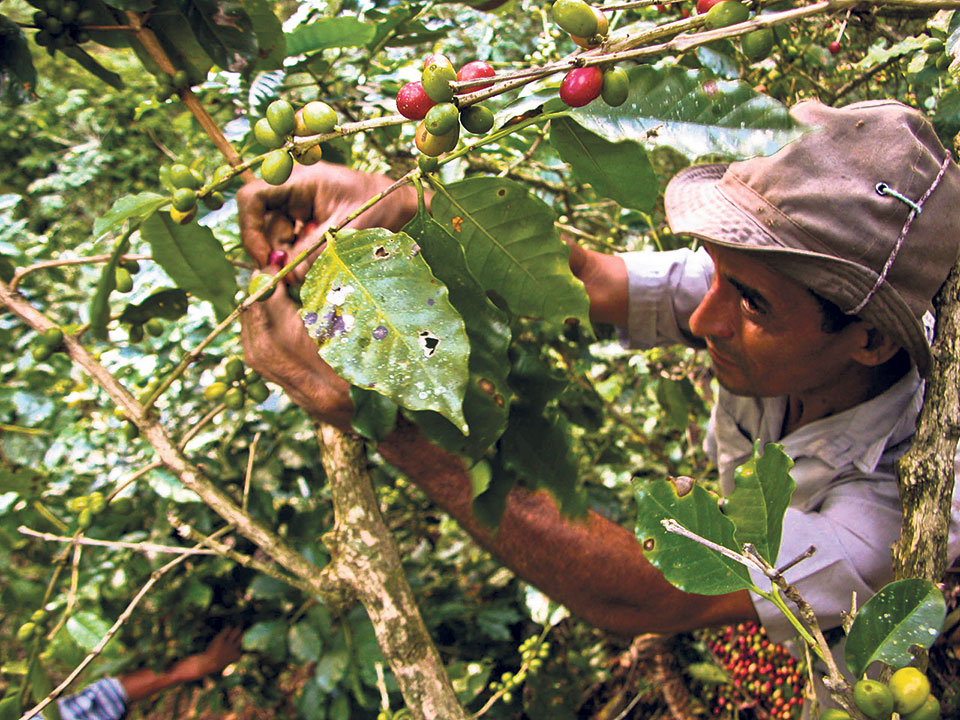